Last September Kyle and I took our vacation to explore the west coast of Washington and Oregon. We both prefer being in the mountains or a big city rather than spending a vacation lounging at the beach all day, so this was a perfect destination for us. I’ve always been drawn to the beauty of both states. As an outdoor lover and photographer, this was a dream vacation. As a planner, I always make a trip itinerary with a general outline of each day and things to see and do in each place we visit. I have grown to be more spontaneous and relaxed, while still being organized. Something we did differently on this trip was to not book any hotel until that night. Road trip style. We didn’t want to feel rushed. We also wanted the freedom to spend more time in places we found interesting. So, part of the plan was to not have a plan. I was really worried at first. It was a little stressful at times. BUT it made the experience even better. (I can say that now, but I know there were times on the trip that we were extremely annoyed with each other.)

How we structured our 10 Days Exploring The Pacific Northwest

We flew into Seattle late on our first day and stayed at the Fairfield Inn Sea-Tac near the airport. We woke up early (thanks, 3 hour time difference!), rented our car, and went off to explore Seattle. We went to the Pike Place Market, saw the Space Needle, and explored the EMP Museum. We had a couple of drinks at The Pike Brewing Company and ate lunch at a food court type location near the Space Needle. After completing our day of sightseeing, we boarded the ferry to Bainbridge Island. Riding the Ferry was such a cool experience. We drove a couple of hours to our town for the night, Sequim, WA. We stayed at the Olympic View Inn, which was a pretty standard motel. The office recommended we eat dinner at Blondie’s Plate and IT WAS SO GOOD. Go there if, for some reason, you are ever in Sequim. (Check out my Spending A Day In Seattle post for more details about our day in this wonderful city.)

The next morning we drove to our first stop in Olympic National Park, Hurricane Ridge. (Side note: you need a National Park Pass to visit Olympic National Park. You can purchase them at the Park Office before you get to the entrance of the park.) Hurricane Ridge was absolutely breathtaking. Unfortunately for us, it was very overcast the day we hiked, so I will just need to plan to go back there one day to experience the views. We drove past Lake Crescent on our way to Sol Duc Falls. Lake Crescent was pretty, but not much to do in that area. We took a short hike when we arrived at Sol Duc Falls to see the falls. The falls were just OK but the hike was rather enjoyable. The whole Sol Duc Falls area was rather touristy and crowded. We drove to Forks, WA, where we stayed for the night at Forks Motel. Forks is a very small town and they are “famous” for having scenes from Twilight filmed there. It was a pretty odd experience. That night we ate dinner at the local sports bar.

We ate breakfast at Forks Coffee Shop, a local diner with a pretty good breakfast, before heading to the Hoh Rainforest. Let me tell you, the Hoh Rainforest is absolutely incredible. We walked around two different trails to take it all in. Experiencing a rainforest is wonderful. Then we drove the coast to Ruby Beach. It was an interesting contrast to what most people think of when they hear beach as it was a little cold and there were tons of large rocks around. Both places are a worthy stop if visiting Olympic National Park. Mount Rainier was our next destination, so we headed out of Olympic National Park to continue our 10 Days Exploring The Pacific Northwest in search of a hotel somewhere between Ruby Beach and Mount Rainier. The Relax Inn, located in Chehalis, WA was where we decided to stay for the night. I was impressed with the quality and price of this motel. Dinner was some finds at the local grocery store since there were only fast food restaurants nearby.

Mount Rainier is stunningly beautiful. The weather was not on our side because it was cloudy when we visited Mount Rainier and Mount Saint Helens, so we could not take in all of the beauty. Mount Rainier is huge! I was in awe the entire time we were in the park. We hiked the Nisqually Vista Trail: a short hike with fantastic views of Mount Rainier. Right next to the trail was the Visitor Center and Paradise Inn. Eager to see more, we hiked Skyline Trail to Myrtle Falls, a paved trail which was relatively easy to hike. Unfortunately we could not stay all day, but a new bucket list item is to come back to stay at the Paradise Inn and hike more of this beautiful park.

Stopped for lunch at Tall Timber Restaurant in Randle, WA before making our way into Mount Saint Helens. The Ranger Station is right across the street from the restaurant and they provided us with a map and usual information for our visit. Driving around Mount Saint Helens is rather eerie. The roads were a little scary in some parts and dead trees filled the drive up to the top. A much different feel that Mount Rainier. The rain was coming down pretty hard so we didn’t see much when we got to the top, but we finally caught a glimpse of Mount Saint Helens on our way out. That night we stayed at the Comfort Inn & Suites in Vancouver, WA, right outside of Portland, OR. Probably the nicest hotel we stayed at on our trip and because it was in Vancouver and not downtown Portland it was way cheaper. We decided to stay here a couple more nights as well. There are plenty of restaurants nearby but we decided to pick up a pizza and call it a night.

Driving through the Columbia River Scenic Highway was a highlight of our 10 Days Exploring The Pacific Northwest. Extremely enjoyable to drive around and see the beauty in that area. There are plenty of trails to walk and waterfalls everywhere. Our drive started at the Vista House, which offers great views of the Columbia River Gorge. One of the trails we decided to hike was The Bridal Veil Falls, which was quick and relatively easy to hike. Now, I’m not sure if this is because we went on Labor Day weekend, but getting to the Multnomah Falls area was extremely crowded. Seeing Multnomah Falls was incredible! It’s a short walk to the bottom of the waterfall. It was raining while we were there so we didn’t walk around as much as I would have liked, but the experience was still very good.

Before our drive through the Columbia River area, we needed to do some laundry, so I found Spin Laundry & Lounge in Portland. It’s actually a really fantastic idea, you can chill out with a drink and some food while your laundry is being done. Of course Portland would have this place.

The Alphabet District in Portland is amazing! So many shops and restaurants in this area. Happy hour drinks were had at The Fireside, a beautiful restaurant with creative drinks, then we walked across the street for dinner at Mio Sushi.

Portland is amazing and one of my favorite cities in the world! There are so many awesome things to do that it might seem overwhelming if you have limited time to spend there. After doing some research, I decided to check out these places: Voodoo Doughnuts (a must if you’re in Portland), Powell’s Bookstore, Ground Kontrol, The International Rose Test Garden, and the Pittock Mansion. For dinner we ate at Rock Bottom Brewery, which was just OK, then went to Salt and Straw for ice-cream (creative, delicious, glorious ice-cream). Portland is full of local hard ciders so stopping at the Portland Cider House for a flight was a must to end the evening.

Mount Hood is home to the iconic Timberline Lodge where the movie the Shining was filmed. There wasn’t a lot going on at Mount Hood, but it was cool to see. If you’re into skiing then this might be up your alley. I’d definitely pass on it if you don’t are care about skiing or The Shining. There were some good views at the top. However, it took a while to drive out there. So, I doubt I’d suggest it for anyone planning a trip out to the Portland area.

Cannon Beach is where The Goonies filmed a portion of the movie, and that’s mainly the reason we went. Also because it’s really pretty there. Ecola State Park is kind of a waste of time, you pay to enter the park and it is a view of the beach. You can actually get to the beach if you park around Haystack Hill Park. The beach was really enjoyable to walk around and the large, beautiful rocks were great in photographs. It’s about an hour and a half away from Portland, so if you have the extra time to go here I’d recommend it! We stopped at a Thai restaurant on the way back to the hotel that night. Exhausted and ready to prepare for our trek home. 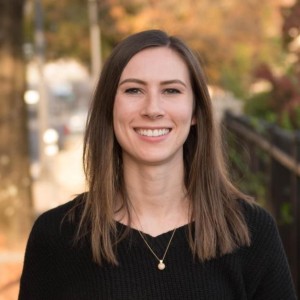 Hannah Bubp lives in Knoxville, TN with her husband, Kyle, baby girl, Claire, and two dogs. She is a professional photographer and a new Stay At Home Mom. She enjoys writing, cooking, hiking, traveling, and navigating life as a new mom.

This site uses Akismet to reduce spam. Learn how your comment data is processed.

Welcome To The Wander Guide!

Thank you for subscribing.

we respect your privacy and take protecting it seriously